a crop of a painting I started but never finish (there are a LOT of those :blushes:)
Posted by Stephen Munn - Castlemaniablog.com at 22:05 No comments: 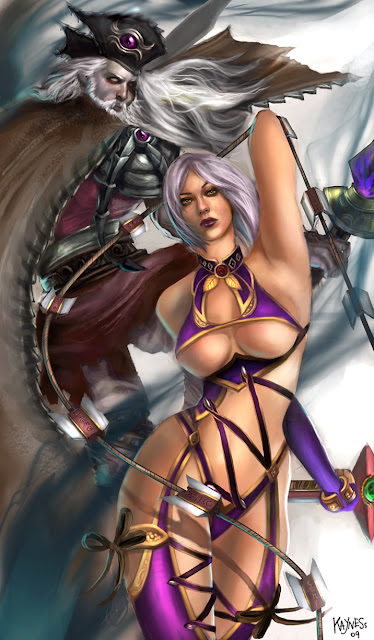 a piece done to celebrate the return of my precious Intuos3 from repair. You don't know how elated/happy/ecstatic I was when I saw the parcel!

well, thematically, it's a Soul Calibur series fanart. It's inspired by a Soul Calibur fan (whose name I won't mention because I don't know if he wants me to or not) who emailed me to tell me how much he likes my rendition of Siegfried and wants to see more of my Soul Calibur fan art. This time it's the father-daughter pair; Ivy Valentine and Cervantes de Leon. I was originally going to paint Ivy and Voldo, because they're cool in a dark-kinky-gothy kinda way, but scrapped Voldo in favour of Cervantes.

Their outfits are based on the SC IV version concept art, and please bear in mind that I don't play Soul Calibur beyond SC II so I'm not actually very familiar with how they look beyond that, I just tried to stick close to the concept art I found on Google Images. I deliberately didn't put Ivy's left arm armour thingie because I dont' know how it looks like from the underside.

Also, I'm not used to drawing characters in this kind of style and dynamism, so I greatly appreciate any criticisms and suggestions on how I can improve on this style in my future pieces. I know I'm far from perfect but I try my best!
Posted by Stephen Munn - Castlemaniablog.com at 22:30 No comments:

In My Eyes I Only See You

The title is deliberately weird-sounding, it's a line from the song 'Sway', originally by Dean Martin - "Dear, but my eyes will see only you", but I like the sound of this title better

This picture concerns a disfigured, possibly special needs baby bunny called Mix. He is in love with Six Fingered Albino Cyclops but his love is unrequited due to him being a rabbit and a baby

About Mix - he and his sister came to me one day. At first I only saw his big sister, 'C', as he was hidden behind her. C was fiercely protective of her brother - she wouldn't let me go near them until she managed to convince her that I meant no harm. When she got to know me a bit better, she explained that the reason she is that way because she feels guilty and feels she is responsible for her brother's condition. Mix still isn't out of his diapers yet, but according to C, when he was younger he was assaulted by a gang of teenage thugs who think it's funny to take a knife and carve out a baby bunny's face. C therefore felt like it's her fault she couldn't protect her brother from those thugs. Even though Mix is still a baby, he is old enough to realise that because of his horrific scars, people tend to recoil at the sight of him. Once a happy child, he is now quiet and withdrawn, and still has yet to speak his first word.

Mix is in love with Six Fingered Albino Cyclops. In his eyes she's the most beautiful girl in the world, but he dares only to watch her from afar because he's afraid that like others, she will shun him because of his disfigurement. Being much younger than her and a rabbit doesn't help his chance any. Well, I hope she will one day notice him and they'll be happy!
Posted by Stephen Munn - Castlemaniablog.com at 21:17 No comments:

of her character. The story is that, Molly lost the original file that I sent her, and I don't have it anymore either because it was in my old and very knackered laptop which doesn't work anymore, so I told her I'll paint a new one for her.

Photoshop CS3 and 3-4 hours
Posted by Stephen Munn - Castlemaniablog.com at 18:19 No comments:

A commission made for

of her friend and his girlfriend. Kim told me to take free reign on the composition and subject matter, so I decided to draw them as pirates. Who doesn't pirates anyway?

It's different from how I work normally; I drew the sketch with pencil on paper, scanned it and then painted it over in Photoshop. I think I work better this way, but alas, I don't always have access to the scanner, so I don't know....

This pic is hugely inspired by Anry Nemo, whose artwork I'm obsessed with lately
p.s. I painted from a VERY bright screen, so if it appears too dark on your monitor, my apologies!

Posted by Stephen Munn - Castlemaniablog.com at 01:18 No comments: