You know, since I started doing traditional art again, I think I've been on this unstoppable bender. LOL!  In all sorts of medium and trying out different styles as well.  I think while I was in "the flow" while I was drawing one of these pictures, something inside me just went off.  Like a lightbulb moment or something.  It dawned on me that my technical skill is at the point where i don't need to work and practice specifically for improvement anymore, and it made me feel so immensely relieved.  Not saying that I don't think there's a room for improvement in my art; of course there is always room for improvement! It's just that I'm at a point where I don't need to worry about it anymore.  It's like I have a little voice in my head giving me the permission to be truly creative and free to draw whatever my heart desires without a care for the world now that I've pretty much mastered the foundation.  So yeah, that's what I've been doing - trying out new styles, new subject matters, new colour schemes, more abstraction.

I think now that I'm creating art in traditional media a lot more often and getting to know my way around how each of them work, my own style seems to be unfolding really quickly and it's really exciting to watch!  My last batch of traditional art (which I didn't post here in this blog because they're rather embarrassing) is just a hodgepodge bunch of figure painting, weird abstract fruity things and chinese masks (seeing how thickly i can lay down colours with watercolours)...They're purely experimental and just a chaotic mess.  Well, I guess this bunch is still experimental, but there's more unity in the style and subject matter as to not look so chaotic.

Looking at them now, I realize how pretty much all of it are these twisted, cutesy whimsical things and characters.  It's not really intentional, I just seem to gravitate towards that kind of stuff.  Oh, and shiny and super colourful as well! I love shiiiiiny stufff! and more colours the better! happy, happy eye-bleeding acid bright colours!

I made these with Colleen coloured pencils.  I swear, these are one of the bestest ever colour pencils, and they're are supposed to be, like, kiddie grade colour pencils?? I have a pack of 60, double-ended and this sells for SGD$11 in Popular here in Singapore and the colours are just so vivid and it goes down so creamy.  It's actually a lot better than some of the artist-grade colour pencils that I've tried that are so much more expensive and the pigment load is so poor in comparison, feels scratchy and blends nowhere nearly as well.  For that price, I feel like I could just go wild and draw whatever crazy things I want without fear of using it up and then having to go out and buy more and thus, throwing lots of $$$ away (it makes no sense now that I typed it down...I mean, that's what they're for, right?)... and this is really important, guys, because fear...fear of making mistakes, fear of doing things wrong, etc. is what freezes you up and keeps you from being as creative as you can be!  I think this pencil is a massively underrated gem - an artist quality range of coloured pencils masquerading as kiddie grade...LOL!

I first learned of this from biffybeans' blog...and you know what, I actually have used this before when I was a primary school kid living in Thailand (the factory is, after all, located in Thailand).  I just totally forgot about it until I came across her review.  Then I immediately went to this seller on ebay and bought a pack of 60.  It kind of took ages to arrive and in the meanwhile I found out that they sell it here in Singapore too, so I bought another pack of 60. Well, they're cheap so whatever, and I like to have an extra set handy.  Only the round barreled pencils are available in Singapore, so if you don't like runaway pencils and want to get hexagonal ones, this is the place to go.

I think I've rambled on quite a bit here, and I still have more stuff to post, so I'm going to make this a multi-part post 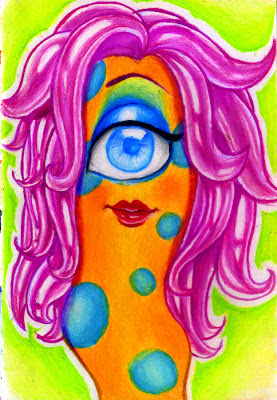 A colourful cyclops who is a unique snowflake. 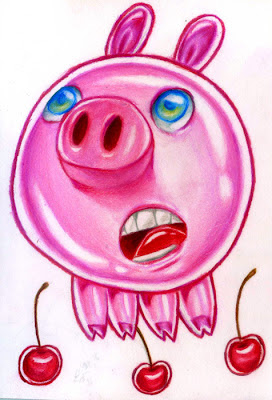 This is a pigeepoopoo based on Julia's (Stephen's daughter) design.  I love how the legs are all bunched up together! It's almost like a pig-Zoidberg.  Later I found out that what I thought was its mouth is actually its heart! ; 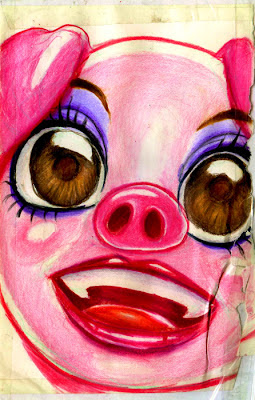 The happy piggess.  She's very happy because she knows what a beautiful person she is, both inside and out.  Well, I drew this in one of my cycling trips to the nearby park and I only have an oldish small notebook to draw into (hence the torn edges...I tried to remove it and collage it on to my sketchbook).  It's originally drawn as a counter to the expression, "lipstick on a pig", because I don't like the implication that pigs are something that are ugly and undesirable. 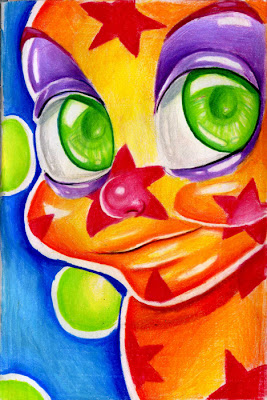