When I made my last blog post, I really didn't think it is going to be a multi-part series.  I thought I was going to write a bit of text to accompany my drawings, about what went through my mind while making those pics and the stories behind them and such, but when I started I just realized that I had so much to say, and it turned out to this long thing!  I also wanted to have a few pieces before I post because I'm too lazy to scan every time I finish a picture - easier to scan a bunch and post them all, but I didn't even realize how much of a hoarder I am! LOL! Anyway, on to the pics. Everything but the last one are from the selected pages of my sketchbook. 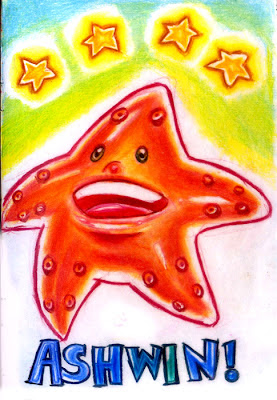 Ashwin is a character from a graphic novel/comic thingie I have yet to write. I have a story for him though.  I will not share yet, but the hint is in his name.  His name is a common Indian male name, derived from the Sanskrit word for light, and also means 'brave knight' in Thai.  He really fits both meanings of the word. I used Lyra Rembrandt Polycolor pencils on this one, and I don't think I'm too impressed with it.  I mean, it's as good as my Colleen, except it's less colours (the biggest set I could find locally is a tin set of 36) at about eight times the price.  I ought to use the pencils more so that I can confirm this impression though. 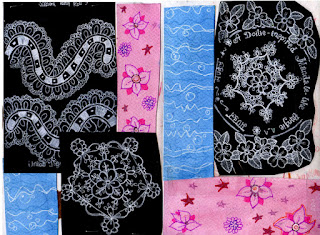 I doodled with a white pen on my black book and cut and pasted them onto my sketchbook.  The top left is me testing two white pens.  The first one is Sakura Gelly Roll white pen (top) and Uniball Signo white pen (bottom).  The Sakura pen's a lot whiter but to be fair, that's because it's brand new, while I had that Uniball Signo pen for a few years.  I also doodled some mandala like things.  I painted on scraps of watercolour paper and pasted them here just as a space filler. 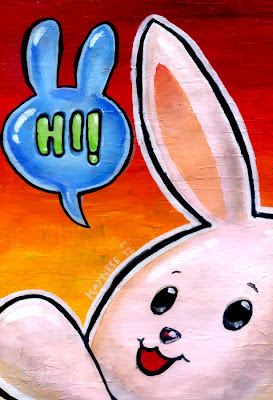 A bunny who said HI in a bunny-shaped speech bubble.  I use Daler-Rowney Cryla acrylic paints here.  I'm not sure what to think about it.  I mean, yeah it's pretty cool - thick body, lots of colour, lots of coverage, just like an acrylic paint should be.  The thing is, I don't have first hand experience of other acrylic paints to compare it to..  This is literally the first ever bunch of artist-grade acrylic paints I ever bought, believe it or not.  I am not a major acrylic painter.  I used to use it when I was in school, but they were ever only student grade, and of runnier formulation.  I can hardly remember what it's like now, but I don't remember it being less pigmented than this, but again I'm not sure.  The one thing I don't particularly like about Cryla is that the colour range is rather limited.  Its brightest blue is Azure Blue, as you can see on the centre part of the thought bubble (it's not pure though; I mixed it with Titanium White)...it's just not quite...bright enough for my taste. I love super brilliant aqua-turquoise blue kinda shades and they don't seem to have it, and my attempts at mixing it, using this shade and cobalt green, just results in a darkish blue-green colour. sigh.  I spotted some Liquitex in another art store recently and I saw that they have some of the most brilliant blues...ahh..I'm so tempted! 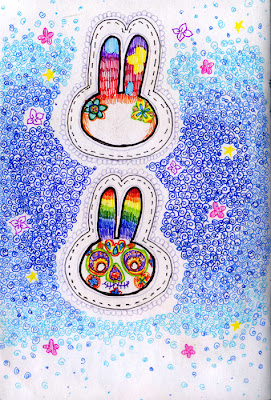 Bunnies! Designs on the bunnies' faces are based on a previous watercolour drawing

Cyclophabbit (Thanks Stephen for the name suggestion!).  I went to the art store earlier this week and bought 3 Derwent Coloursoft pencils and 3 Prismacolor pencils on open stock.  The Coloursofts that I got are Fuchsia, Electric Blue and Blue and the Prismacolors in Spanish Orange, Hot Pink and White, and I decided to make a drawing using only these colours...and here it is! There are reasons behind the character design, two of which I'll explain here.  The blue colour represents Vishnu, and the elephant represents Ganesha. 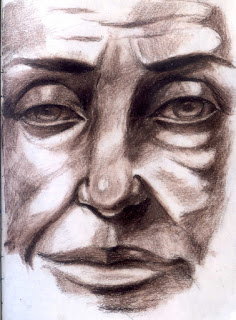 Just an attempt to do realism in between all these colourful whimsical drawings.  Not very successful! I didn't use a reference or anything, and I got bored after a while (hence it's unfinished).  I used Prismacolor in Dark Umber and a colorless blender (I plan to write more about colour pencil blenders in a future blog post) and...well it just didn't quite react in the way I expected, but then again I didn't have a lot of prior experience as a serious colour pencil artist. 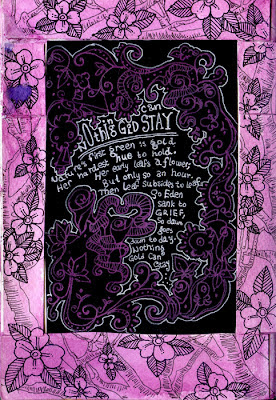 Just some doodling for my favourite poem, Robert Frost's Nothing Gold Can Stay.  I spilled some water on the ink at the top left, and it bled :(. 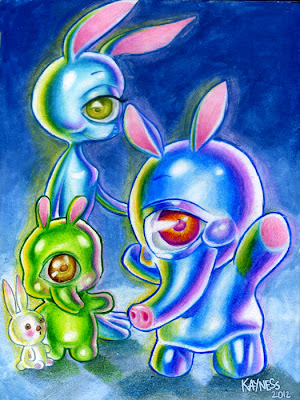 Cyclophabbit, his baby brother (and a rabbit friend!) and his mother.  I reverted to my dear, beloved Colleen colour pencils for this.  I just like them so much!  The background is filled out with acrylic paint and I went over it again with colour pencils.

There might yet be part 3, who knows! Keep your eyes peeled!
Posted by Unknown at 15:09

These look great! Nice to see you experimenting with your styles as well as different mediums!