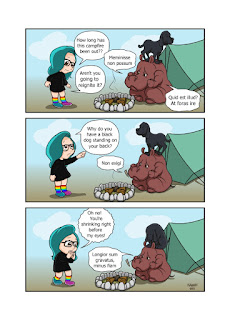 Look, I made a comic page about depression!

This is the first page I've ever done that is completed entirely in Manga Studio EX 4.0 (some of you might know it as Comic Studio).  I was kind of also experimenting with the colouring tools here.  It's fine but I think in the future I'll stick with Photoshop when it comes to colouring because of the availability of blending modes.

Edit: Explanation:
* the conversation went something like this if it was entirely in English (I plugged the hippo's dialogue bits into Google Translate so obv the Latin is atrocious):
Panel 1
me: How long as the campfire been out?
hippo: I don't remember
me: Aren't you going to reignite it?
hippo: What's the point? It's going to go out again anyway

Panel 2
me: Why do you have a black dog standing on your back?
hippo: Can't get rid of it

Panel 3
me: Oh no! You're shrinking right before my eyes!
hippo: The longer I am depressed, the smaller I become

* can't remember = memory loss is a symptom of long-term depression
* black dog = a metaphorical figure for depression.  One of the users of this metaphor was Winston Churchill.
* shrinking hippo = reduction in hippocampus volume is an effect of long-term depression.  Hippocampus is the component of the brain that plays an important role in short-term and long-term memory.
* camping hippo = a word play on the hippocampus
* speaking in latin = just because hippocampus sounds Latin-y
Posted by Unknown at 05:06 1 comment: 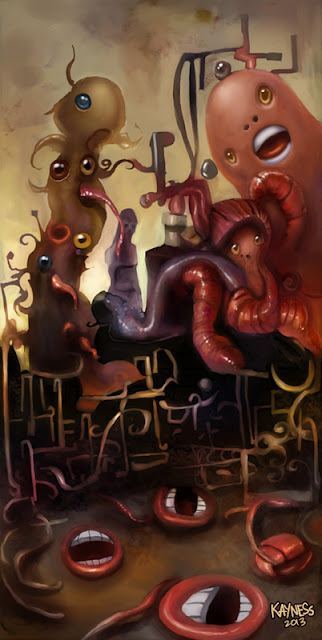 I drew this some time last year, while I was out cycling.  I doodled this on a back of a store receipt I had in my bag.  I meant to scan and colour it digitally some time ago but kind of got sidetracked by work and other stuff, and to be honest it slipped out of my mind until...now. yeah.
Posted by Unknown at 12:19 No comments: 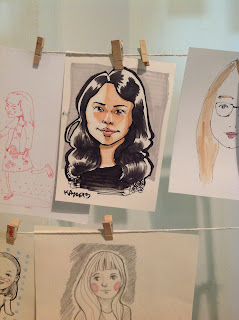 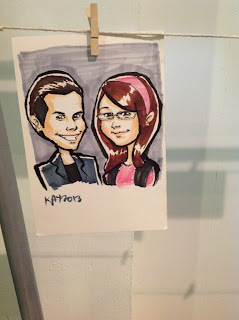 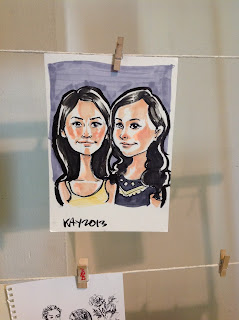 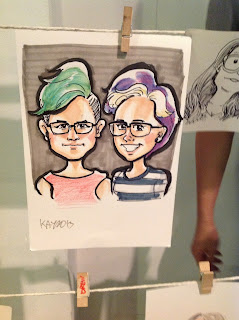 Portrait After Dark May 2013

back again after two months of absence! I use some new materials for this event, well, they're not new-new, but I usually use watercolours for PADs and now I use markers.
Posted by Unknown at 09:48 No comments: 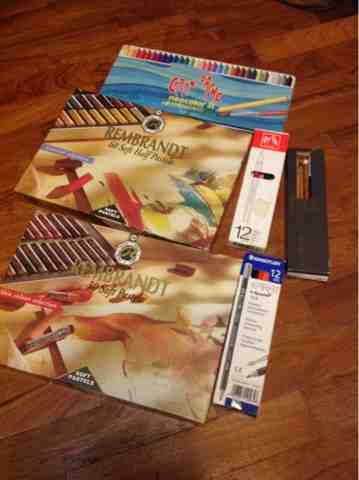 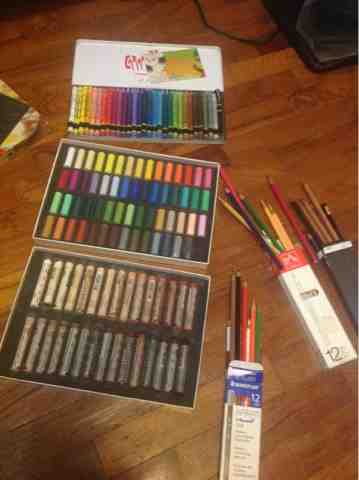 Today I inherited a bunch of art supplies from uncle Ken, my mum's friend because he doesn't use them anymore. OMG THIS. IS. AMAZING!!!!!! I'm so thrilled and over the moon! I love just this kind of thing!

I also accumulated some more art supplies since my last post about it; a bunch of copic markers and some shinhan markers as I'm now regularly going on caricature gigs.
Posted by Unknown at 13:44 1 comment:

Drizzt & Wulfgar: I'll catch you if you fall. 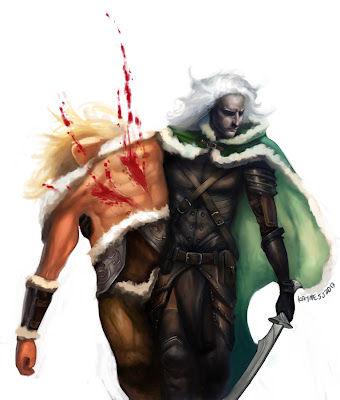 This picture was swimming in my mind for a long time.  I wanted to draw my hero from when I was a teen and everyone's favourite drow: Drizzt Do'Urden.   I used to read every book featuring him from the beginning at Homeland, and stopped some years back at The Lone Drow so I'm rather behind right now, and I really was so enthralled by the books that I wanted to illustrate every scene, but for a long time I was not confident in my abilities to do it to a level that I can be satisfied with (and not to mention how much work that would be).  This is supposed to be him with Wulfgar, catching the wounded Wulfgar as he falls.
Posted by Unknown at 15:23 1 comment: