The Making of: The Onigiris' Visit

This is a post documenting the process of The Onigiris' Visit.  It is not going to be full of technical information, but just what was going through my mind at that time.

I painted this picture almost entirely in OpenCanvas, only because this program automatically records the process of the painting, called 'events', which can be saved into this file format called 'event file' and played back, which makes it very easy to be recorded and mixed into a video, which I planned to do and upload to YouTube.

Alas, it wasn't meant to be.  I copied some part of it, edited in Photoshop, copied that edited image and pasted it back on OpenCanvas (Photoshop is a lot better for precision and colour adjustment), and I totally screwed the event file up.  For some reason OpenCanvas cannot handle that. UGH! SO MUCH FRUSTRATION!  Cue tearing out my hair...naw just kidding. I put in way too much work on my hair to justify pulling it out.

Anyway, here's the next best thing. 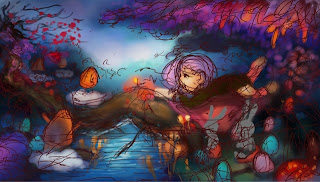 Ok, well, this is just the beginning...so there's nothing much here.  Let's not be too picky, just ...uh yeah. draw things and whatevs. Just go with the flow, behbeh!

I always have an image in my head whenever I started a painting, in fact, that's often the only reason why I paint in the first place.  The thing is, the pictures I have in my head are often not precise.   I mean, I know how I want it to look like, but if you hypothetically ask me to zoom in I would be like, hmmm I don't really know. That's why a lot of the final images look like entirely different pictures from early progress shots. Even when they are precise, the end image always look slightly different from the picture I originally had in my head anyway.

This is also the reason why my drawings in the early stages of the painting look absolutely dreadful.  In fact, I used to be too embarassed to show them because every artist I seem to see have all these tidy drawings and their progress seems to be linear, like as if they knew what they're doing all along. sigh... 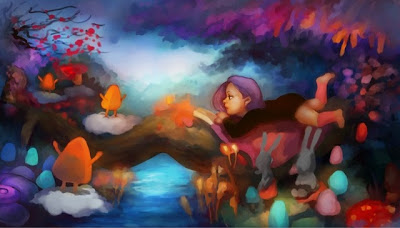 Painted over the pencil lines. 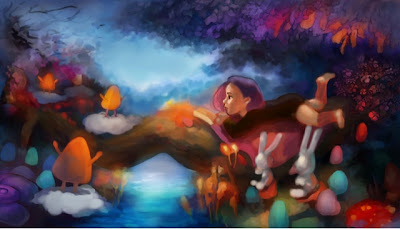 By this pic I already spent a lot of time painting those leaves on that tree and those flower bush thingie...and honestly I wasn't too pleased with the way it was coming out.  It wasn't going the way I wanted it to and I couldn't quite point a finger to it.  It was a little disappointing because I had high hopes for this pic.  I almost abandoned the painting at this point because it just looked so...disharmonious.  Something is wrong, I couldn't quite figure out what! WHAT IS IT?  Is there just not enough contrast?  Are the darks just not dark enough? Whaaaaaaat??? 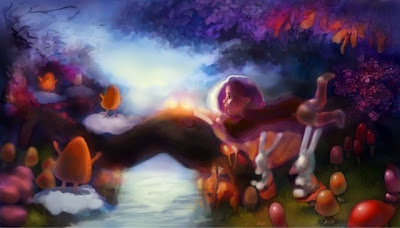 By this picture I was already kind of figured it out and was glad that I did not give up.  After a lot of scrutiny, 'stepping back to see the whole picture', I figured that there was a certain 'scatteredness', a lack of unity in the colour scheme.  I fixed it by making the mushroom, grass and other foreground elements relatively warm-hued, and left the colour schemes in the mid and background as they are.  I brightened the background which was a huge mistake, because hello!! this was supposed to be night time...and that just looks like...well, not night time. 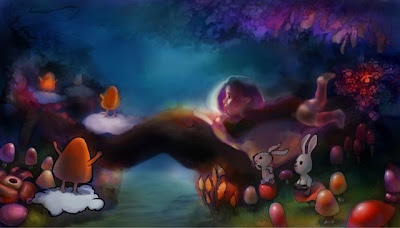 Ah, this is SO MUCH better!  I looked up some screenshots from Torchlight II (I love the art style of that game) for the colour inspiration.   A and B are emerging! 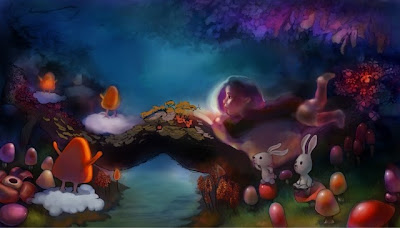 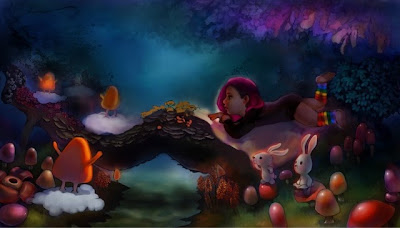 Since the picture's stylistic direction somewhat veered off from the original course, I found that the flower bush on the right no longer fits the picture, so I painted over it with ...a normal bush. 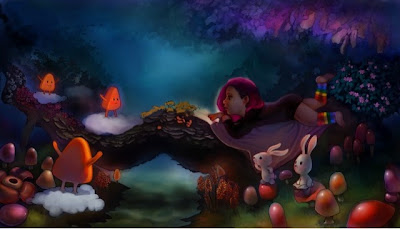 ...with flowers, of course! 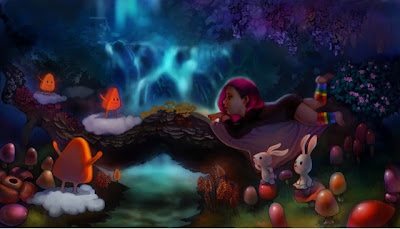 Added the waterfalls.  I also added some details to the leaves on the tree (it's based off Jacaranda, I'm not sure if it's apparent) so that it's more congruent in style with the rest of the picture. 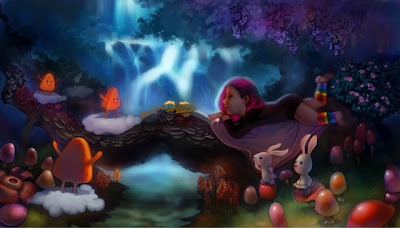 I added the waterfalls because I love glowy stuff. Glow glow! Illumination! YAY!  I hope it was good idea..because now in retrospect I'm not so sure.
Posted by Unknown at 07:07